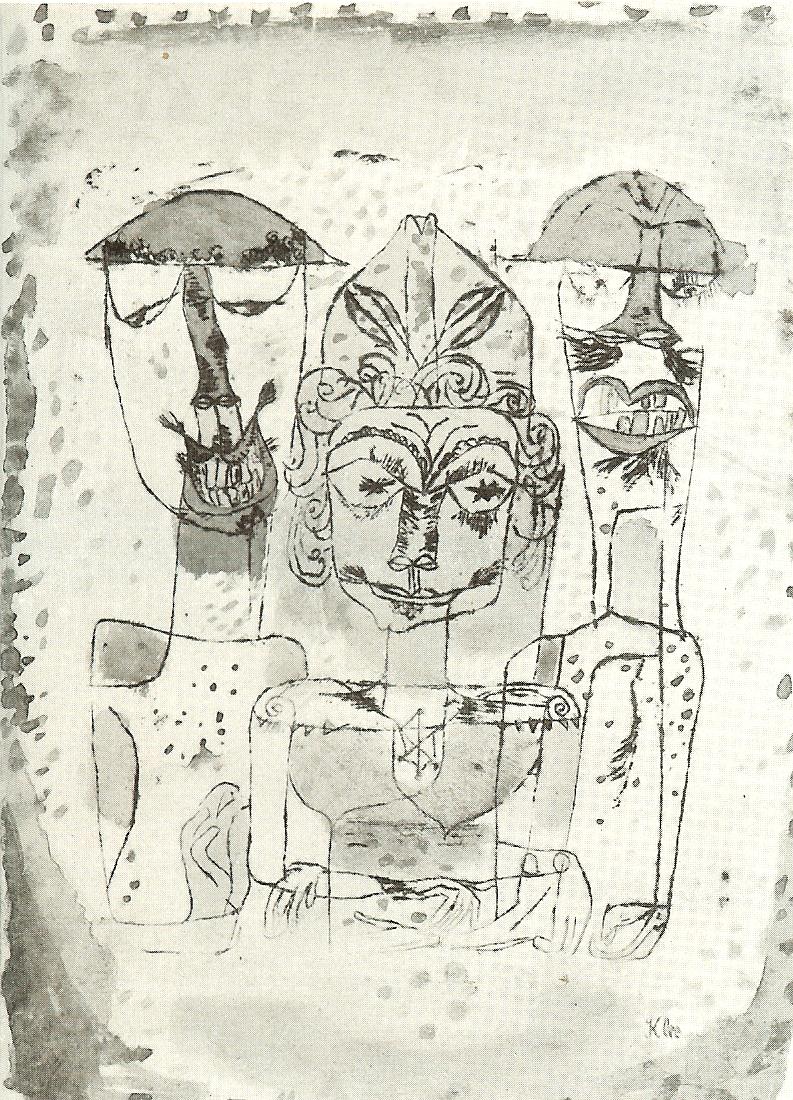 Paul Klee, Greek and two Barbarians, 1920. An example of "entartete Kunst" from the Gurlitt Collection via.

These days, the subject of art comes up more often in the context of law-breaking than any other time, save for (perhaps) the subject of art as investment. From the destruction of ancient artifacts in the Middle East by the so-called Islamic State (crimes against humanity?), to art thefts as leverage to bargain down criminal charges, to fakes, copyright infringement, frauds by art dealers, lawsuits (by collectors against dealers, by collectors against auction houses, by artists against dealers and dealers against artists), and the ongoing headache of sorting out what is called Holocaust art, we now associate art not with aspirations toward a higher understanding of life or the world, but with sordid activities and disreputable people. Wickedness and money is an easier topic for most of us than art itself, and more delicious, which probably explains why Dante’s Inferno has far more readers than his Paradiso. 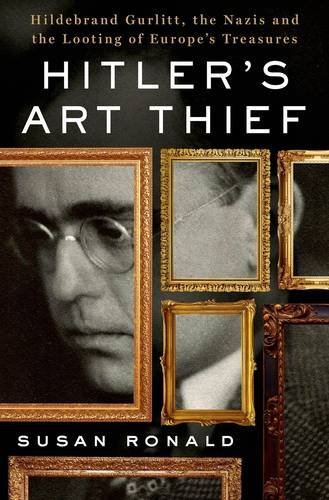 Much easier to read than Dante is Susan Ronald’s Hitler’s Art Thief, which describes a German art dealer, Hildebrand Gurlitt (1895-1956), a get-along-by-going-along sort with pretensions to art historical scholarship, who was part of a team of similar scoundrels that wrested artwork from museums and (often Jewish) individuals for the benefit of the Nazi hierarchy.1 Ronald regularly refers to him as “unctuous,” but his principal talents were the ability to detect when artworks of some note were ripe for the taking and how to keep himself free of war crime charges.

Hildebrand Gurlitt was unknown to all but a few historians until 2012, when the Munich apartment his son, Cornelius, lived alone in was raided by German police raided on the basis of the assumed failure of the son to pay income taxes. How did Cornelius have so much cash? Within this small apartment, police found 121 framed oil paintings and another 1,258 drawings, prints and watercolors by such artists as Marc Chagall, Edgar Degas, Honoré Daumier, Otto Dix, Paul Klee, Henri Matisse, Pablo Picasso, Auguste Rodin, and Henri de Toulouse-Lautrec. Cornelius claimed that he had been left this artwork by his father, but immediately the questions arose: how did Hildebrand Gurlitt acquire all this art, and does some or all of it more rightfully belong to the families of victims of the Nazis? Cornelius himself died in 2014, leaving the fate of this cache of artwork to the courts to sort out.

Gurlitt’s approach to modern art came to be modified by the growing power of the Nazis, Ronald writes. He became, by the early 1930s, “flexible in his opinions . . . outwardly charming, and to appear to act without guile.” The dealer found that European Modern art, particularly the German Expressionists, was available at bargain prices—the result of Nazi disdain with what was called “degenerate” art—and could be sold to Americans at high prices. Never let a good crisis go to waste.

Among the Nazi policies toward culture in general and fine art in particular was that certain artists, among them Nazi sympathizer Emil Nolde, were forbidden to paint at all. “An infraction could be determined by the mere whiff of turpentine . . . during a surprise visit by the Gestapo,” Ronald writes, and both regional and national museums were emptied of their offending Modern artworks and non-obedient directors. The highlight of this purge was the 1937 “Degenerate Art” exhibition in Munich of 600 or so appropriated paintings and sculptures that were intended to be publicly mocked.

Gurlitt became, by 1937, one of the regime’s four principal art dealers, who were charged with locating offensive art—or even non-offending art owned by Jews—that could be used to raise hard currency through trade with the West. (The Soviets looted their own national museums in the 1920s and 1930s for the same reason.) “In all, there were 101 [German] public collections that were stripped of modern art,” adding up to thousands of artworks. Within a short period of time, they moved to private collections. American collectors, dealers and museums, most notably the Museum of Modern Art, acquired—and, thereby, saved—numerous works of art, but Ronald notes the moral traps these acquisitions held, reinforcing the appropriations of private collectors’ property and providing financial support for the Third Reich. As one can predict, not every confiscated artwork was sold abroad or sold at all, but kept by the dealers, which is how Gurlitt’s personal collection grew. He stole from the victims of Nazi abuse and, eventually, from the Nazi regime itself in terms of artwork and taxes on unreported income.

Why did Hildebrand Gurlitt partake in this venture and not just refuse or emigrate? Ronald doesn’t offer an explanation, save for claiming that his father’s death in 1937 shut down the only “moral compass” in his life. More likely, the dealer followed the herd, as did so many other Germans, and assumed he could protect himself and make money at the same time. The book’s title, Hitler’s Art Thief, reveals the author’s own verdict on the dealer: he was a criminal. “He’d allowed himself to be contaminated by the regime’s lawlessness, brutalizing others, and had no idea that he, too, had become one of the army perpetrating Nazi criminality.”

Gurlitt was investigated by agents of the U.S. government after the war, but the Truman Administration was more interested in war crimes involving genocide and slave labor than in the theft of artwork and its use in financing the Nazi war machine, so he was never put on trial or jailed. Gurlitt had covered his tracks, holding onto almost all of the art he had amassed and resuming his career as an art dealer. It wasn’t until that raid by German police in 2012 that the story began to unravel. Turning back the clock to discern how owns what is an ongoing problem that will perhaps never be resolved, as is the case with much Holocaust art.

The narrative suffers from a lack of information—or lack of research by Ronald?—on Gurlitt’s life, and the author repeatedly relies on suppositions. He certainly was secretive. Did Gurlitt attend a public meeting where Adolf Hitler and Joseph Goebbels both spoke in Saxony in 1925? “There is no surviving public record whether he went to hear the Nazi leaders speak,” she writes. “[H]owever, given the publicity Hitler generated, it would have been in keeping with Hildebrand’s curiosity to go along to hear the man. . . .” The book’s chapters are divided into parallel narratives of Gurlitt’s life (upbringing, finding himself, career) and Hitler’s (and, by extension, Germany’s). With so many studies of Hitler and twentieth century Germany available, readers of Hitler’s Art Thief probably don’t need a recap of what led Europe into the First World War, the social and political unrest following the end of that war in Germany, anger at the Treaty of Versailles, the burning of the Reichstag, how well the Nazis did in succeeding parliamentary elections up to 1933, and major battles. Gurlitt didn’t seem to pay much attention to the politics of the time, concentrating on trying to get and keep an art museum job, and Ronald relies exclusively on secondary sources for her discussion of Germany and Hitler. However, without all the space devoted to what was going on in Germany, this might have been just an extended magazine article. 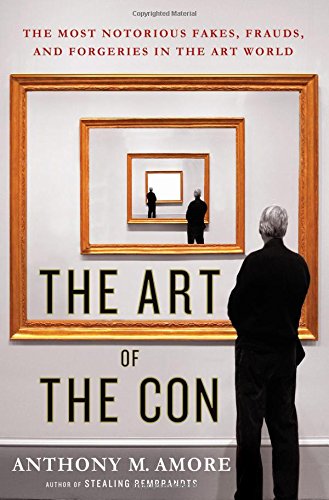 Hitler’s Art Thief has company in the discussion of bad things bad men do with art. Anthony M. Amore’s The Art of the Con is a breezy overview of recent examples of duplicity in the art trade, filled with instances of fakes and frauds committed by artists, artists’ assistants, and dealers.2 All the crooks described here are lured by a combination of deadly sins—greed, vanity, laziness—and others in the art trade who are taken in by them seem blinded by many of those same weaknesses. Ann Friedman, president of Knoedler Gallery, who sold tens of millions of dollars of faked Abstract Expressionist paintings, ultimately leading to her dismissal, the closing of the venerable gallery in 2011, and myriad lawsuits, is described by Amore as “no criminal. . . . Instead, it seems far more probable that she was intoxicated by the prospect of being part of the unleashing of a heretofore unknown collection on the world.” A different seller of fakes, a confidence man named Luigi Cugini, “avoided major auction houses and art dealers and preyed on people less knowledgeable about fine art.”

There are a dozen tales of recent bad behavior. The Art of the Con is fun to read, with anecdotes just right for dinner party conversation. Amore appears to have done little in the way of original research or interviews, instead relying on published articles on the subject in newspapers and magazines, and his overview of the problems of fakes and frauds in the art world is neither new or consistent. At times, he credits scientific physical analysis for uncovering fakes, chiding experts and connoisseurs for being duped. Elsewhere, he credits experts and connoisseurs with identifying forgeries. The courts go up and down in Amore’s esteem, but the author does maintain an ongoing respect for law enforcement.

Daniel Grant is the author of The Business of Being an Artist (Skyhorse Publishing) and several other books.